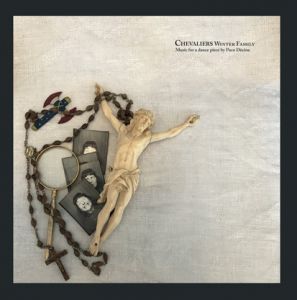 order
wishlist
Winter Family's new album, a composition for a dance piece by Italian choreographer Paco Dècina (pipe organ, piano, voice), partially recorded in St Martin church of Maxéville, France.
"I recorded the pipe organ there, inspired by the Alsatian philanthropist organist Albert Schweitzer whose slow, bombastic performances, limited by faulty technique have always touched me deeply. In 2006, my aunt Loulou agrees to lend me the keys to the church. Ten years later, Loulou passes away, I play on this same pipe organ during her funeral. During the fall of 2018, in her room with old floral wallpapers, so cold, that I empty, surrounded by her missals and huge crucifixes I remix this pipe organs and the voice of Ruth. Through this late remixing, we wanted to deliver this woman from her agony, her eyes turned to the milkish Lotharingia sky and beyond, trying to illustrate this Catholic France of yesterday, as vain and terrifying as a month of November in this cold and humid garden, within reach of the incessant song of the A31 highway."
Xavier Klaine
Winter Family is a weird wave music duo composed of Ruth Rosenthal & Xavier Klaine living in Tel-Aviv. They published several albums on the labels Sub Rosa, Alt.Vinyl and Ici D'ailleurs. They play and record in clubs, galleries, museums and churches around the world since 2004 and create documentary theater performances in Centquatre / Paris and The Vidy Lausanne Theater.
order wishlist
published in May 2021
17.00 €
in stock