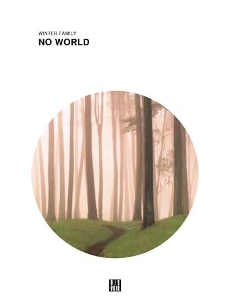 order
wishlist
No World is an original piece in an audio book composed from daily images, sounds and texts collected through the Internet, songs, poems, interviews and field recordings created by Winter Family between 2011 and 2014 while living between Paris and in the Caribbean neighbourhoods of Brooklyn, NYC.
Inspired by the concept “iconography & circulation” of the geographer Jean Gottmann, Winter Family make a raw close up on the every day banalities and want to share this rather new and particular form of well-being and addictive embarrassment that we all experience within the greatest common denominator. Winter Family collaborated with the artist Yochai David Matos for this book.
Published following the show “No World/FPLL” at Festival dAvignon, from 5th to 12th July, 2015.
Winter Family is a weird wave music duo composed of Ruth Rosenthal & Xavier Klaine living in Tel-Aviv. They published several albums on the labels Sub Rosa, Alt.Vinyl and Ici D'ailleurs. They play and record in clubs, galleries, museums and churches around the world since 2004 and create documentary theater performances in Centquatre / Paris and The Vidy Lausanne Theater.
order wishlist
Edited by Danièle Rivière.
published in June 2015
bilingual edition (English / French)
16,5 x 21,5 cm (softcover)
64 pages (80 color ill.)
29.00 €
ISBN : 978-2-914563-74-1
EAN : 9782914563741
in stock