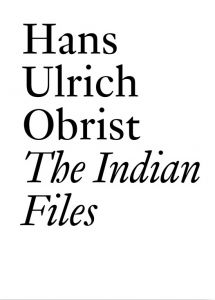 pre-order
wishlist
A much-needed mapping of the Indian art scene.
Following the publication in 2014 of Hans Ulrich Obrist's "The Czech Files," this publication brings together 11 interviews with Indian artists and cultural producers carried out in the 2000s and 2010s by professional conversionalist Hans Ulrich Obrist, in the artists' studios or exhibitions. Edited by Shanay Jhaveri, New York Metropolitan Museum of Art Assistant Curator of South Asian Art, this book is a much-needed volume about the Indian art scene.
The conversations with Gulam Mohamed Sheik, Bharti Kher, Geeta Kapur, Shilpa Gupta, and Raqs Media Collective, among others—all born between 1915 and 1976—map the evolution of contemporary art in India from its Independence in 1947—the starting point of an artistic revival. Through a plurality of practices, the successive visions of different generations of artists express their own stakes and problematics. This book contextualizes the development of Indian contemporary art within historic events that have been a great source of creation and a path of emancipation, recalling the development of artistic movements and landmark independent projects. The artists notably express the will to break with an established nationalist art, as well as with the Western traditions, and to respond to the lack of public museums and support from institutions in the second half of the 20th century.
Curator and critic Hans Ulrich Obrist (born 1968 in Zurich, lives and works in London) is considered one of the most influential figure in the art world. He joined the Serpentine Gallery (London) as Co-Director of International Exhibitions and Programmes and Director of International Projects in 2006.
pre-order wishlist
Edited by Clément Dirié and Shanay Jhaveri.
Interviews with M.F. Husain, Gulam Mohammed Sheik, Geeta Kapur, Vivan Sundaram, Nalini Malani, Dayanita Singh, Amar Kanwar, Zarina Hashmi, Shilpa Gupta, Bharti Kher, and Raqs Media Collective.