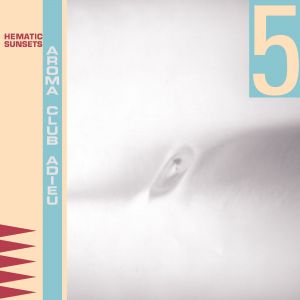 order
wishlist
Asmus Tietchens' Hematic Sunsets shut down the Aroma Club with a final release. The album "Aroma Club Adieu" features 12 exquisite pieces of death lounge electronic pop performed on electronic organs and entertainment devices of various kinds.
Under the moniker Hematic Sunsets, Asmus Tietchens has explored his love of the Darth Vader organ sound—a cheesy, spooky, deranged but still catchy form of electronic pop. The body of work of Hematic Sunsets stands out as unique, displaced and in a sexy way out of fashion. As a bonus to the final album of the project artist friends of Asmus Tietchens have composed short hommages and farewell greetings that are included here in the form of a single sided 12" on white vinyl. Among those saluting are such illustrious musicians as Heinz Funk, Felix Kubin and Michael Rother.
Limited editon of 300 copies.

Hematic Sunsets is an alias (an anagram to be exact) for legendary German avantgarde composer and sound artist Asmus Tietchens (born 1947 in Hamburg).
Since 1975 Tietchens has been working as an independent musician; in 1980 he released his first solo record Nachtstücke. After producing a series of rhythmic and harmonic albums for the Sky label in the early 1980s he released his first industrial record Formen letzter Hausmusik in 1984 on Nurse With Wound's United Dairies. Here Tietchens articulated his musical interests clearly: everyday noises were treated and at times deformed beyond recognition and placed into new contexts. Tietchens has released more than 80 albums on numerous labels (the Mille Plateaux sub-label Ritornell, Staalplaat, Selektion, Richard Chartier's Line label, Die Stadt, to name but a few). His solo works are mainly concerned with the manipulation of concrete sounds and (most recently) pure sine waves (on his Mengen series) and their placement (assemblage?) in time and space. Asmus Tietchens has been awarded with the prestigious Karl Sczuka Prize of the Südwestrundfunk (SWR) twice: in 2003 for his work Heidelberger Studien 1-6 and in 2006 for Trois Dryades.
While his solo efforts are often austere formal works (yet never lacking a twisted humour), Hematic Sunsets is a different beast altogether. Reminiscent of his Sky-era attempts with rhythm and melody, the Aroma Club series is Tietchens warped, almost parodic (per)version of lounge music. Each record of the series is based on the sounds and rhythms of one particular (preferredly cheap) organ/keyboard, usually a Yamaha product.
The result is a timeless and completely unique take on muzak using cheap keyboard sounds usually associated to drunk wedding bands or your grandmother's home organ family music. Tietchens elaborately transforms the cheesy associations into cold, bloodless, almost unhuman pop tunes totally lacking the sensationalism and pseudo-fervour of most music, especially modern pop music.
order wishlist
Published by Aufabwegen, Köln.
published in March 2021
Black vinyl LP + white 12inch
35.00 €
in stock