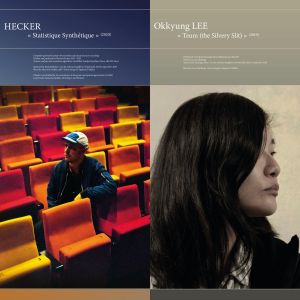 order
wishlist
A split album as part of the GRM Portraits series with two electroacoustic pieces by Florian Hecker (computer-generated multiphonic sounds and resynthesized recordings of localized textures) and Okkyung Lee (an acousmatic piece written for computer-generated sounds, pre-recorded materials and cello that was developed for the Acousmonium sound diffusion system during a residence at Ina GRM, Paris, in January 2019).
Statistique Synthétique draws as much from the history of computer sound synthesis as from its latest developments. But well beyond developing simply as a proof of concept, this piece aims to transcend the abstract status of synthetic sound objects and lead them to a properly hallucinatory state, that is to say to a meeting point where the object and perception dissolve into each other, in a sort of transcendental field. Beyond, also, hylomorphism, to reach the world of matter-form fusions, where perception knows how to see “shoulders of hills”, as Cézanne wrote.
Teum (the Silvery Slit) is, as the title suggests, an overture, an opening to the game of multiplications, fragmentations, duplications. But it is also the opening understood as the void that blossoms between two borders, a break from which escapes a double tension, both the pulling force of these two edges which move apart and the opposite force of reconciliation, of compression. Okkyung Lee invites us to a truly telluric moment, a rare moment of expression where tectonic movements and shear stresses become music. If the earthquakes were, as we thought in the 18th century, due to underground thunderstorms, there is no doubt that this piece of music, both celestial and continental, could have been their audible manifestation.
Download code included.


Editions Mego · Okkyung Lee 'Teum (The Silvery Slit)' (excerpt) (SPGRM 003)
In his sound installations and live performances, Florian Hecker (born 1975 in Augsburg, lives and works in Vienna) deals with specific compositional developments of post-war modernity, electro-acoustic music, and other, non-musical disciplines. He dramatizes space, time and self-perception in his sonic works by isolating specific auditory events in their singularity, thus stretching the boundaries of their materialization. Their objectual autonomy is exposed while simultaneously evoking sensations, memories, and associations in an immersive intensity.
Okkyung Lee (born 1975 in Daejeon, South Korea) is a cellist, composer, and improviser who moves freely between of artistic disciples and contingencies. Since moving to New York in 2000 she has worked in disparate contexts as a solo artist and collaborator with creators in a wide range of disciplines. A native of South Korea, Okkyung Lee has taken a broad array of inspirations—including noise, improvisation, jazz, western classical, and the traditional and popular music of her homeland—and used them to forge a highly distinctive approach. Her curiosity and a determined sense of exploration guide the work she has made in disparate contexts.
Okkyung Lee has appeared on more than 30 albums and has collaborated with Arca, David Behrman, Chris Corsano, Jacques Demierre, Mark Fell, Ellen Fullman, Douglas Gordon, Jenny Hval, Vijay Iyer, Christian Marclay, Ikue Mori, Phill Niblock, Bill Orcutt, Marina Rosenfeld, John Zorn, among others.
order wishlist
Text by François Bonnet.