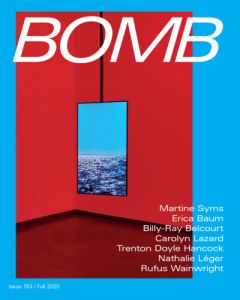 order
Featuring interviews with Martine Syms, Erica Baum, Billy-Ray Belcourt, Carolyn Lazard, Trenton Doyle Hancock, Nathalie Léger, and Rufus Wainwright.
BOMB Magazine is a print quarterly publishing in-depth interviews between artists alongside artists' essays, literature, and portfolios. The magazine has been publishing conversations between artists of all disciplines since 1981. BOMB's founders—New York City based artists and writers—created the magazine because they saw a disparity between the way artists talked about their work among themselves and the way critics described it. Today, BOMB is a multimedia publishing house that creates, disseminates, and preserves artist-generated content from interviews to artists' essays to new literature.
order
published in September 2020
English edition
23 x 28,5 cm (softcover)
160 pages (ill.)
7.50 €
in stock
table of contents