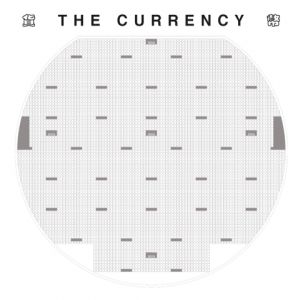 order
A collaboration between artists Musquiqui Chihying (Taipei, Taiwan/Berlin) and Gregor Kasper (Berlin) together with rapper Elom 20ce (Lomé, Togo).
The Currency by Elom 20ce & Musquiqui Chihying & Gregor Kasper is a vinyl record whose golden color is reminiscent of a wafer, one of the thin silicon discs used in the production of microchips. The rap song of the same name on the A-side is a collaboration between artists Musquiqui Chihying (Taipei, Taiwan/Berlin) and Gregor Kasper (Berlin) together with rapper Elom 20ce (Lomé, Togo), who positions himself as a griot, a traditional West African storyteller, oral historian, and singer.
The lyrics in French, Mandarin, and German offer a poetic take on various aspects of contemporary cultures and economies that are blocked out and go almost unnoticed: the entanglement of digital payment services in China (WeChat and AliPay) with the everyday lives of their users, whose every movement and action becomes visible to the state and the market and can thus be monitored; the new currency ECO, which is set to replace the current CFA franc in eight West African countries at the end of 2020, representing a first step toward monetary independence for these countries; the widespread belief in a clean, free, and fair digital cloud that relies on a systematic disregard for its material foundations, such as the industry geared to the production of wafers and other electronic hardware and the working conditions that prevail in it.
The B-side contains the sound piece "The Hubs," a conversation with the architect, anthropologist, and FabLab founder Sénamé Koffi Agbodjinou (Lomé/Paris), accompanied by music composed by Elom 20ce. In the WoeLab "open hardware" workshop in Lomé in Togo, Agbodjinou introduced an alternative digital barter currency that relies on social activities and local service as a medium of exchange.
order
Graphic design: xīzhuāng, Berlin.
published in October 2020
12" Vinyl
24.00 €
ISBN : 978-3-95679-578-7
EAN : 9783956795787
in stock