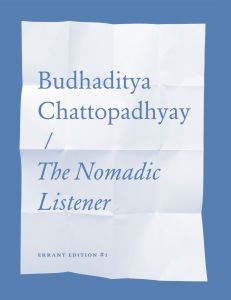 order
wishlist
Based on the author's artistic research on migration, contemporary urban experience, and sonic alienation, The Nomadic Listener is composed of a series of texts stemming from psychogeographic explorations of contemporary cities, including Copenhagen, Berlin, Kolkata, Vienna, Delhi, Hong Kong, Mumbai, and New York, among others.
Each text is an act of listening, where the author records his surrounding environment and attunes to the sonic fluctuations of movement and the passing of events. What surfaces is a collection of meditations on the occurrences of life movingly interwoven with memories, associations, desires and reflections. As readers we are brought into a tender map of contemporary urban experience, and the often lonely, surprising, and random interactions found in traveling. The Nomadic Listener includes parallel drawings based on the original audio recordings, and appear as ghostly renderings of the corresponding experiences. The recordings are published by Gruenrekorder and accessed through a QR code included in the book.
Budhaditya Chattopadhyay is a contemporary artist, researcher, writer and theorist. Incorporating diverse media, such as sound and moving image, Chattopadhyay produces works for large-scale installation and live performance addressing urgent issues such as the climate crisis, human intervention in the environment and ecology, migration, race, and decolonization.
Conceptually, Chattopadhyay's work inquires into the materiality, objecthood, site, and technological mediation of lived experiences, and considers the aspects of subjectivity, contemplation, mindfulness, and transcendence inherent in listening. His artistic practice intends to shift the emphasis from object to situation, and from immersion to discourse in the realm of sound and media art. As an artist, Chattopadhyay is an attentive and com(passionate) listener of the world around him, endeavoring to connect the disparate resonances across the borders and cultures through a practice committed to advocating for reciprocity and equality in the contemporary societies. His works are published by Gruenrekorder (Germany) and Touch (UK).
Chattopadhyay is a Charles Wallace scholar, Prince Claus grantee, and Falling Walls fellow, and has received several residencies and international awards, notably a First Prize in Computer and Electronic Music category of Computer Space Festival, Sofia, and an Honorary Mention at PRIX Ars Electronica, Linz. Chattopadhyay has an expansive body of scholarly publications in the areas of media aesthetics, sound art, contemporary media, cinema and sound studies in leading peer-reviewed journals. He has graduated from India's national film school, specializing in Sound, completed a Master of Arts degree in New Media and Sound Art at Aarhus University, Denmark, and received a Ph.D. in Artistic Research and Sound Studies from Leiden University, The Netherlands.
order wishlist
published in September 2020
English edition
15 x 21 cm (softcover)
124 pages
18.00 €
ISBN : 978-0-9978744-6-4
EAN : 9780997874464
in stock