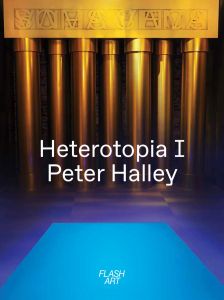 order
wishlist
Peter Halley's multimedia installation for the Magazzino del Sale N. 3, a 15th-century warehouse in the Dorsoduro district of Venice.
In the summer of 2019, at the invitation of Flash Art and the Academy of Fine Arts in Venice, Peter Halley created a multimedia installation, Heterotopia I, that transformed Magazzino del Sale N. 3, an enormous 15th-century warehouse in the Dorsoduro district of Venice. Curated by Gea Politi, Heterotopia I employed digital murals and dramatic lighting to animate a sequence of eight labyrinthine rooms designed by the artist. Halley invited artists Lauren Clay, R.M. Fischer, and Andrew Kuo to contribute installations for three of the environments. Wall text along the exhibition walls by writer Elena Sorokina.
Peter Halley (born 1953 in New York City, where he lives and works) received his BA from Yale University and his MFA from the University of New Orleans in 1978, remaining in New Orleans until 1980. For over twenty-five years, Peter Halley's geometric paintings have been engaged in a play of relationships between what he calls “prisons” and “cells”—icons that reflect the increasing geometricization of social space in the world in which we live. Halley is one of the original members of the “Neo-Geo” movement.
Halley has had one-person museum exhibitions at the CAPC musée d'art contemporain de Bordeaux (1991), the Museo Nacional Centro de Arte Reina Sofia, Madrid (1992), the Stedelijk Museum, Amsterdam (1992), the Des Moines Art Center (1992), the Dallas Museum of Art (1995), the Museum of Modern Art, New York (1997), the Kitakyushu Municipal Museum of Art (1998), the Museum Folkwang, Essen (1998), and the Butler Institute of American Art (1999).
His work has been exhibited in galleries in Chicago, London, Madrid, Moscow, New York, Paris, Rome, Seoul, and Tokyo. Since the mid-1990s, Halley has produced site-specific installations for exhibitions and as permanent public works. These projects have been realized at the State University of New York, Buffalo (1998), the city library in Usera, Spain (2002), the Banco Suisso d'Italia Art Collection, Turin (2003), and the Dallas/Fort Worth International Airport in Texas (2005). In 2008, he completed a large permanent installation for the Gallatin School at New York University.
Halley has also written on art and culture throughout his career. His early essays, which address post-structuralism, post-modernism, and the digital revolution of the 1980s, have been anthologized in two books of collected writings. In 2001, he received the Frank Jewett Mather Award from the College Art Association in the U.S. for his critical writing.
From 1984 to 1987, he managed the gallery International With Monument with Ashley Bickerton, Jeff Koons and Meyer Vaisman. From 1996 to 2006, Peter Halley published Index Magazine, which featured in-depth interviews with creative people. He has taught at Columbia University, UCLA, and the School of Visual Arts. Halley was Director of Graduate Studies in Painting and Printmaking at the Yale University School of Art from 2002 to 2011.
order wishlist
Texts by Gea Politi, Cristiano Seganfreddo, Elena Sorokina.
published in October 2019
English edition
18 x 24 cm (softcover)
96 pages (ill.)
25.00 €
ISBN : 978-88-941540-9-2
EAN : 9788894154092
in stock