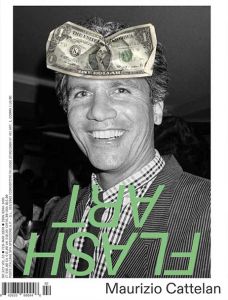 order
wishlist
This issue of Flash Art explores a sort of archeology of images, aiming to reflect on issues of appropriation and authenticity in their most contemporaneous sense, whereby any original or preexisting artwork, image, or product can be invested with a multiplicity of meanings.
For this issue Maurizio Cattelan has conceived a special cover project for the theme, here in conversation with the genre-bending artist and designer Virgil Abloh. From artists of the Pictures Generation, as Sherrie Levine, to the manifold messages in Barbara Kruger's images; from the “affective proximity” in Arthur Jafa to the complexities of the human brain in Jordan Wolfson; from the Alice Channer's repudiation of authorship to Olivia Erlanger's embrace of the image as a free-floating signifier, each uses appropriation as a means of grappling with our relentlessly refractive present.
Also in this issue: An essay on “The Copy as Origin and Renewal” by Jane Ursula Harris on the work of Renee Cox, Debora Kass and Yasumasa Morimura; a conversations from the late 1980s between Jeff Koons, Haim Steinbach, Ashley Bickerton, and a special artwork conceived by Dinamo Swiss typeface agency.
Flash Art is an international quarterly magazine and publishing platform dedicated to thinking about contemporary art, exploring the evolving cultural landscape through the work of leading artists, writers, curators and others. One of Europe's oldest art magazines, Flash Art was founded in Rome in 1967, before relocating to Milan in 1971, and was originally bilingual, published in both Italian and English. In 1978 two separate editions were launched: Flash Art International and Flash Art Italia. Today the magazine remains one of the most recognizable and widely read publications of its kind, and is distributed in 87 countries.
order wishlist
published in February 2020
English edition
22,5 x 29 cm (softcover)
132 pages (color & b/w ill.)
15.00 €
in stock
table of contents