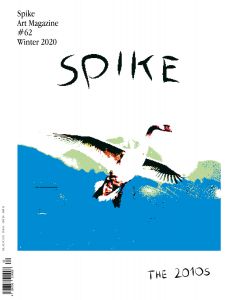 order
wishlist
Spike's winter issue #62 – “The 2010s” – traces the rise and fall of trends like post-internet art and normcore, and bids farewell to older forms of identity politics that have since been replaced by activism, algorithms, social media, and other forces that transformed the cultural landscape of this decade of disquiet.
In the issue, there's also lots to celebrate about the 2010s: the music of Lana Del Rey, for one, as well as a special portrait of the artist Kerry James Marshall. With contributions by Susanne Pfeffer, Paige K. Bradley, Andrea Lissoni, Jon Rafman, and many others who both took part in, and helped to shape, this last decade.
Founded by the artist Rita Vitorelli in 2004, Spike (Spike Art Quarterly) is a quarterly magazine on contemporary art published in English which aims at sustaining a vigorous, independent, and meaningful art criticism. At the heart of each issue are feature essays by leading critics and curators on artists making work that plays a significant role in current debates. Situated between art theory and practice and ranging far beyond its editorial base in Vienna and Berlin, Spike is both rigorously academic and stylishly essayistic. Spike's renowned pool of contributing writers, artists, collectors and gallerists observe and reflect on contemporary art and analyse international developments in contemporary culture, offering its readers both intimacy and immediacy through an unusually open editorial approach that is not afraid of controversy and provocation.
order wishlist
published in January 2020
English edition
21,7 x 28 cm (softcover)
210 pages (color ill.)
14.00 €
in stock