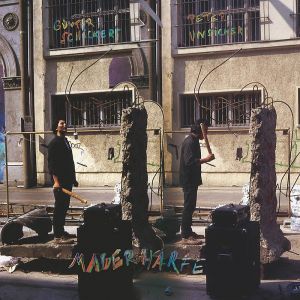 order
wishlist
Three unreleased field recordings from August 1990, documenting a sound installation made from a damaged piece of the Berlin Wall.
Günter Schickert, krautrock maestro of echo-driven psychedelia, returns on Marmo one year and half after the release of the Labyrinth LP. Mauerharfe consists of old and special material, which has officially never seen the light before. It is due for release on the eve of the 30th anniversary of the Berlin Wall fall, as 12” LP with CD, CD and digital formats. The physical versions contain exclusive pictures, liner notes, a prose poem by Peter Unsicker and some draft writings by the artists with reflections on the project.

Berlin, August 1990, first post-wall Summer. Two friends, the locals Günter Schickert and gallerist Peter Unsicker perform a spectacular yet symbolically intimate interpretation of those epochal changing days by building a sound installation with a damaged piece of the Berlin Wall. They persuade the patrol “Feliks Dzierzynski” of the DDR army to transport and relocate a the piece outside Peter's Wall Street Gallery on the Zimmer Strasse, in the borough of Mitte, where only a few months back the intact structure actually passed through.
Once the wall was positioned, they bend down the bars of the iron structure that crop out the concrete, bind piano chords to them, stretch the strings down to the bottom base of the construct and connect guitar amplifiers to the set up. The Berlin Wall is ready to be played as a harp.

Günter Schickert's Mauerharfe are executed between August and October 1990, resulting into three long field recordings.
As Günter Schickert claims, the idea behind the project was the one of representing, in a personal musical way, the feelings and sensations that he – as well as many others experiencing the division and eventually the removal of the Wall - felt through the decades around the presence of this monstrous separator. The wall becomes an instrument, seen both as an object and executor of the experiment, while the human and artistic presence almost vanishes. The atonal and harsh sounds embody the ugliness of an inhuman separation, the terrible echoes of prisons and the lament of its prisoners. The pulling of the strings suggests the repression of a regime, while releasing these it indicates a dash of freedom.
You can get lost into the intensity of the Mauerharfe, find always new sensations and a countless amount of details. If you approach the listening with adventurous spirit and a good dose of curiosity, it can really throw you back into the past, a past of segregation, austerity and suppression, yet of an urging desire of liberation.

The tracks:
Side A features a 19 mins long piece. The tape-induced background noise lays down a carpet of haunting atmospheres and introduces the experiment. Günter starts to test the chords by pulling out, with his fingers, dry and acid timbers. The warm up evolves by investigating wider sinusoidal waves and dilated metallic riffs. The track takes the form of a more conventional music narration, as the artist bangs the harp with a sort of rudimental violin bow creating marching percussive paderns. Layers of psychedelic ambience take over the scene before mixing up with roaring industrial spasms. Lunar sceneries seem to emerge, paving the way to sudden strings feedbacks, crackling distorted clicks and menacing reverbs.
Flip-side, a similarly long take opens up with ferocious urge, like being catapulted into a warfare between iron and cement, sounding like a real military operation. As the strings get hit and pulled, the metal seems to crash into thousands of pieces, dissolving into merciless distortions. Yet it is intriguing to notice how these dynamics of madness occasionally generate wavy and gentle sub-harmonics. This piece adds up intensity in comparison to the previous one, containing enhanced abrasive and distorted frequencies. The final part is marked by monstrous echoing rhythms, before drijing back to a chaotic rumble of fire, metal and concrete.
The third piece, Mauerharfe 3, is a 30 minutes long performance dated August the 13th 1990. As Schickert recalls, 29 years before exactly on that same date, the construction of the Berlin wall was accomplished. This take appears exclusively on CD, with copies included inside the vinyl package and as a separate CD format release. The recording is cleaner than the previous two, giving more width and definition to the sounds. As opposed to Mauerharfe 1 and 2, where the wall of sound is overwhelming, in this 3rd take human presences can be heard: fragments of women voices, a baby crying, the siren of a police car. The compositional approach is more sober, the tones of the harp warmer, closer to an actual one, its notes more gentle, discrete and meditative, sometimes resulting into deep, gong-like percussive timbers.
Günter Schickert (born 1949 in Berlin) is a German musician, guitarist and trumpet player. A seminal figure of Krautrock and Berlin's early electronic scene, he recorded solo albums as well as with bands GAM, No Zen, and Ziguri Ego Zoo.
Peter Unsicker (born 1947 in Heidelberg, Germany) is a German sculptor and gallerist, associated with West Berlin's art scene in the 1980s.
order wishlist
Published by Marmo Music, Berlin. 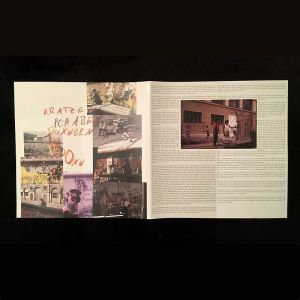 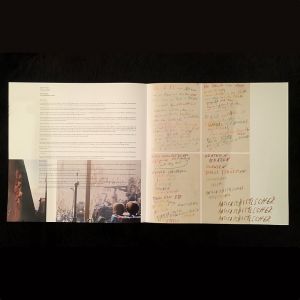