Institute of Sonology [see all titles] 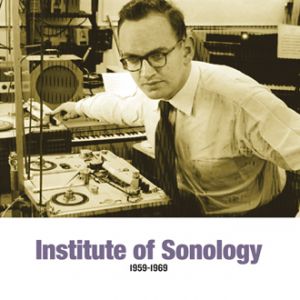 order
Early electronic music from 1959 to 1969 produced by the Institute of Sonology, in Utrecht, Holland. Their pioneering research work helped define brand-new forms during the crucial 1960s decade.
These electronic works, composed between 1959 and 1969 at the Institute of Sonology by Dick Raaymakers, Frits Weiland, Ton Bruynel, Konrad Boehmer, Gottfried Michael Koenig and Rainer Riehn, are raw material similar to what Mego could release today. We need to reflect on this period—the revolution of the fifties and sixties—and understand that what was done then was elaborated without a base—ex nihilo—a music produced by machines designed to construct the new.
Officially founded on September 1, 1960, at the instigation of several people representing cultural institutions, the institute of sonology, had already taken initiatives in the field of electroacoustic music since 1954. A large complex of studios (initially under the name STEM = STudio voor Electronische Muziek) was set up under the patronage of Utrecht university in an old house on Plompetorengracht in Utrecht University; and the instruments and tapes (among them, that of Varèse's Electronic Poem) of Philips laboratories' (important to remember the mythic Philips Pavillion in the Brussels's fair in 1958).
Also available on CD.
Founded in 1960 at the University of Utrecht, Holland, the Institute of Sonology is now part of the Royal Conservatoire in The Hague. It has a 50-year tradition of education, research and production in the fields of electroacoustic music, computer music and sound art.
order
published in November 2019
2 black vinyl LP + insert
7 tracks (4'57 / 4'50 / 4'36 / 15'14 / 17'21 / 5'52 / 20'32)
21.00 €
in stock