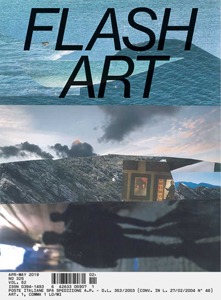 order
Special dossier devoted to Simone Fattal; Marina Fokidis; Peter Halley; Yto Barrada; Ghislaine Leung; Laure Prouvost...
This issue of Flash Art dedicates a ten-page dossier to the career of the Damascus-born artist Simone Fattal. The cover is a previously unpublished project specially conceived by the artist for the magazine. Ala Younis retraces various aspects of Fattal's journey through “the light and the darkness of the self and the other,” while Lina Robertson, with the poem “Alba,” establishes a connection with Fattal's mode of writing par excellence.
This issue starts with an essay-monologue by Marina Fokidis in which she reflects on how “efforts to forge a counter-discourse to hegemony can themselves become hegemonic.”
Also in this issue, Peter Halley's schematic abstractions are considered by Elena Sorokina, starting from an analysis of the room as an architectural container “interconnected by invisible channels of communication.” Peter Benson Miller delves into the work of Yto Barrada, highlighting how the artist unmasks modernist abstractions.
Jacob Korczynski in an interview with Ghislaine Leung talks about the “disruptions” in her exhibitions “which ultimately complicate the institutional infrastructure that enables them.”
This issue also features Laure Prouvost, who will represent France at the 58th Venice Biennale with a project that posits, as Lillian Davies explains, “an infinity of surprising possibilities” in the notion of the collective; and Shu Lea Cheang, who discusses with Tess Edmonson and Paul B. Preciado her site-specific project 3x3x6—a work that will represent Taiwan at the Venice Biennale as well.
Reviews: Ulrike Ottinger, Elliott Jerome Brown Jr., Elif Saydam, K.r.m. Mooney, Tony Cokes, Mark Rodriguez, Lewis Hammond, Approaching Abstraction, Kris Lemsalu, Cady Noland, Isa Genzken, No Thing: Pope L., Adam Pendleton, Ellen Gallagher with Edgard Cleijne: Liquid Intelligence, Decolonizing Appearance, Lauren Luloff, Shoplifter, Naeem Mohaiemen, Kochi-Muziris Biennale, Ibrahim Mahama, Mario García Torres.
Flash Art is an international bimonthly magazine and publishing platform dedicated to thinking about contemporary art, exploring the evolving cultural landscape through the work of leading artists, writers, curators and others. One of Europe's oldest art magazines, Flash Art was founded in Rome in 1967, before relocating to Milan in 1971, and was originally bilingual, published in both Italian and English. In 1978 two separate editions were launched: Flash Art International and Flash Art Italia. Today the magazine remains one of the most recognizable and widely read publications of its kind, and is distributed in 87 countries.
order
published in April 2019
English edition
22,5 x 29 cm (softcover)
132 pages (color & b/w ill.)
15.00 €
in stock