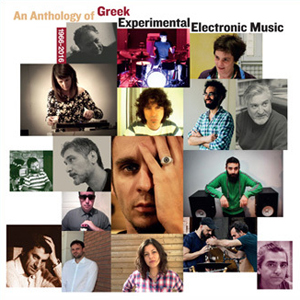 order
This anthology aspires to map the heterogenous landscape of Greek Experimental Electronic Music in all its contextual, sociopolitical, geographical and aesthetic disparity. With a single exception, it zeroes in on post-80s music. It comprises works of very different kinds by composers of all sorts of backgrounds that, still, can be thought of, as both “Greeks” and “Experimentalists”.
Experimental Electronic Music is generally expected to be highly variegated, especially when examined in a breadth of several decades, and with respect to all sorts of artistic, academic, subcultural and other influences. What is not so obvious, however, is that the very notion of Greekness, as well as its contextual and historical offshoots, are highly diversified, too. This anthology is an attempt to map the various kinds of Experimental musics that have been produced by Greeks over the last few decades. More, it is also an attempt to delineate different understandings of what “Greek”or “Experimental” may stand for, by means of zeroing in on the numerous, often overlapping, realities and micro-scenes that are associated with the former.
With Iannis Xenakis, Anestis Logothetis, Dimitra Lazaridou-Chatzigoga, Panayiotis Kokoras, Katerina Tzedaki, Yiorgis Sakellarou, Elainie Lillios, Apostolos Loufopoulos, Christos Michalakos, Free Piece Of Tape, Ilan Manouach, Costis Drygianakis, Nikos Veliotis, Acte Vide, Anastasis Grivas, Theodoros Zioutos, Nicolas Malevitsis, Ilios, Michalis Adamis, Fani Konsta,Tinidou, Scizhic Inzc, Coti K, Georgia Spyropoulos, Dimitris Kamarotos, Panayiotis Velianitis, Panayotis Simsiroglou, Alexandros Drymonigtis, Panos Alexiades, Marinos Koutsomichalis, Yerma.