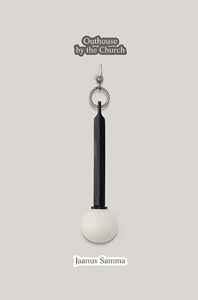 order
wishlist
A research on the borders between public and private space.
Ignoring the hegemonic society that, through instrumental rationality, dictates rules/norms of cultural and moral order, the work of Jaanus Samma reshapes the idea of aesthetic and restores the image of an unofficial society whose collective rituals cross the space of public toilets looking for human relations able to imagine an emotional and corporeal communion. —Raffaella Frascarelli

What can a hundred-year-old Estonian church's toilet and the public restroom of Flaminio Railway Station in Rome have in common? The answer is in Jaanus Samma's Outhouse by the Church. On the occasion of his first solo show in Rome at Nomas Foundation—the first Italian exhibition after representing Estonia at 2015 Venice Biennale—, curated by Eugenio Viola, the Baltic artist has been researching on the borders between public and private space in an environment such as public toilets. Tackling gender and sociological issues, Samma works with an archival approach, documenting the many writings the artist found on the Flaminio public restroom walls and showing the actual remnants of Kodavere's St Michael's Church's outhouse.
The texts, especially written for the publication, by writers and poets such as Travis Jeppesen and Andreas Kalkun, take the conversation outside the canonical boundaries of visual art.
Published following the eponymous exhibition at the Nomas Foundation, Rome, in 2018.
Jaanus Samma is born 1982 in Tallinn, Estonia where he lives and works. He won Estonia's most prestigious contemporary art award the Köler Prize grand-prix.
order wishlist
Texts by Raffaella Frascarelli, Travis Jeppesen, Andreas Kalkun, Jaanus Samma and Hilkka Hiiop, Eugenio Viola.
published in April 2019
English edition
16 x 24 cm (softcover)
88 pages
18.00 €
ISBN : 978-88-6749-354-8
EAN : 9788867493548
in stock