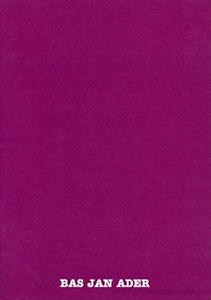 wishlist
Booklet published on the occasion of a 1996 exhibition commissioned by Paul McCarthy and featuring the work of three European artists exiled in California: Guy de Cointet, Bas Jan Ader and Wolfgang Stoerchle. The publication includes texts by Bas Jan Ader, Paul McCarthy, and Thomas Crow, biographical and bibliographical notes.
Published on the occasion of the exhibition “And Gravity” at Le Magasin, Grenoble, from October 19, 1996, to January 5, 1997.
Dutch/Californian performance artist Bas Jan Ader (1942-1975) was last seen in 1975 when he took off in what would have been the smallest sailboat ever to cross the Atlantic. He left behind a small oeuvre, often using gravity as a medium, which more than 30 years after his disappearance at sea is more influential than ever before.
wishlist
Text by Bas Jan Ader, Paul McCarthy, Thomas Crow.
published in 1996
bilingual edition (English / French)
12 x 21 cm (softcover)
16 pages (b/w ill.)
sold out