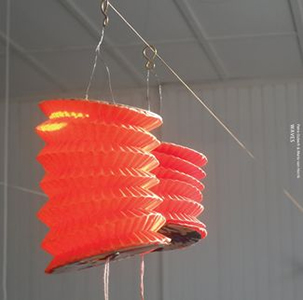 order
wishlist
Investigating the relationship between movement and sound, the duo has been developping installations to translate sound frequencies into vibrations. This double vinyl LP includes four recordings produced as part of this research project.
Dubach's and van Horrik's starting point was the notion that movement and sound are essentially the same: If there is no movement (vibration), nothing can be heard; if there is no sound, nothing moves.
Over the years, the boundaries between movement and sound in their work became more and more blurred while they worked out their root idea in every thinkable form ranging from installations and site-specific works to performances and concerts. In 2010, they started their ongoing research project Waves which involves producing movement feedback using shakers, a kind of loudspeakers that reproduce sound frequencies as vibrations, attached to long strings. Over the years, they have made numerous installations and concerts based upon this concept and have experimented with all sorts of objects incorporated into the basic Waves setup, including Chinese lanterns, hooks, loose strings etc.
This edition gathers four recordings of different Waves installations, all made in Dubach's and van Horrik's private studio in Eindhoven. It is presented as a double 12" set (45 rpm) with a full-color gatefold sleeve and liner notes by Miloš Vojtěchovský.
Limited edition of 300 copies.
Petra Dubach and Mario van Horrik have been working together as an artistic duo in Eindhoven since 1983. Originally, they combined dance and music in concerts, performances, theater pieces, and installations, Dubach being a dancer and van Horrik making music. He is also a long-time member of the Maciunas Ensemble alongside Paul Panhuysen et al.