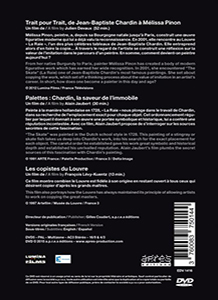 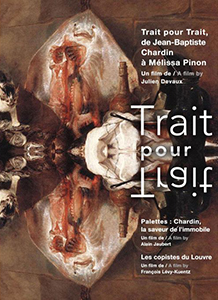 order
wishlist
Three films on the art of copying & the works of painter Jean-Baptiste Chardin.
In Trait pour trait, de Jean-Baptiste Chardin à Mélissa Pinon (52', 2012), director Julien Devaux follows painter Mélissa Pinon. From her native Burgundy to Paris, she has created a body of modern figurative work which has earned her wide recognition. In 2001, she encountered The Skate (La Raie) one of Jean-Baptiste Chardin's most famous paintings. She set about copying the work, which set off a thinking process about the value of imitation in an artist's career. In short, how does one become a painter in this day and age?
The Skate was painted in the Dutch school style in 1728. This painting of a stingray or skate fish takes us deep into Chardin's work, into his search for the exact placement for each object. The careful order he established gave his work great symbolic and historical depth and established his unrivalled reputation. With Chardin, la saveur de l'immobile (30', 1991), Alain Jaubert plumbs the secret sources of this fascination with Chardin's painting. As for François Lévy-Kuentz's Les Copistes du Louvre (13', 1997), it portrays how the Louvre has always maintained its principle of allowing artists to work on copying the great masters.
order wishlist
Edited by Gilles Coudert.
Films directed by Julien Devaux, Alain Jaubert, François Lévy-Kuentz.
published in February 2016
French version with English / Spanish subtitles
DVD Digipack (DVD5 - PAL - Multizone - AC3 Stereo –-16/9 & 4/3)
95' (3 films)
20.00 €
ISBN : 979-1-0914902-69
EAN : 9791091490269
in stock
view video sample
https://vimeo.com/143117490