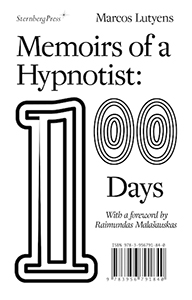 wishlist
An account of Lutyens' long-term Hypnotic Show at Documenta 13 in 2012.
When Marcos Lutyens arrived in Kassel in the summer of 2012, he didn't know he would end up staying for the entire 100 days of documenta 13 to perform 340 hypnotic sessions with the audience. Unfolding in the Reflection Room in Kassel's Karlsaue Park, it was the most involved installment of the Hypnotic Show to date—“an exhibition that exists only in the mind of the audience,” according to Lutyens's collaborator Raimundas Malašauskas. Lutyens also didn't know that he would write a book about it: Memoirs of a Hypnotist: 100 Days, an intimate and hardly qualifiable document. Here, the artist chronicles the Hypnotic Show and puts together all kinds of improbable experiences for his readers: research of cognition and neurological activity, deep exploration of varying states of consciousness, and, at the center, the possibility for contingency and embodied dematerialization within the current thinking of art.
Born 1964 in London, Marcos Lutyens lives and works between Los Angeles and Gloucestershire. His singular creative practice has universal resonance at this defining moment. Lutyens believes that social and emotional awareness as well as consciousness and environmental justice are key factors in the art of today. "Gone are the days when artists can sit in their studios making work that is purely aesthetic," he says; "art needs to be in the world and of the world. The artist needs to be vital and active, fostering resourcefulness, contemplation, and community action." Lutyens is wellversed in neuroscience, cognitive psychology, artificial and animal intelligence, ecological systems, bacterial interaction, and many kinds of indigenous knowledges of the world at large. Fluent in three languages, he has an uncanny ability to empathize and to tap into the most receptive parts of the human spirit. Lutyens' talents are multidimensional and, in many ways, mysterious. Lutyens' artistic practice also targets the psychic and emotional well-being of his audiences by skillfully leading participants in meditative and hypnotic exercises that affect the deepest levels of their psyches. His works take form in installations, sculptures, drawings, short films, writings and performances.
Lutyens has exhibited internationally in numerous museums, galleries and biennials, including the Havana Biennial (2019); as keynote artist invited by the Guggenheim at Culture Summit Abu Dhabi (2019); the Frye Museum, Seattle (2018); Miró Foundation, Barcelona (2018); Main Museum, Los Angeles (2018); Latvian National Museum of Art, Riga (2018); 33rd São Paulo Art Biennial, São Paulo (2018); the Guggenheim Museum, New York (2017); The Armory Show, New York (2017); Boghossian Foundation, Brussels (2017); Palazzo Fortuny, Venice (2017); La Monnaie de Paris, Paris (2017); Palazzo Grassi, Venice (2017); 57th and 55th Venice Biennale of Art, Venice (2013 & 2017); Liverpool Biennial, Liverpool (2016); 14th Istanbul Biennial, Istanbul (2015); MoMA PS1, New York (2014); National Art Museum of China, Beijing (2014); dOCUMENTA(13), Kassel (2012); Los Angeles County Museum of Art, Los Angeles (2010); Centre Pompidou, Paris (2010 & 2014); Royal Academy of Arts, London (2010); 7th Venice Biennale of Architecture, Venice (2000).
wishlist
Edited by Kari Cwynar.
Foreword by Raimundas Malašauskas.

Memoirs of a Hypnotist

Memoirs of a Hypnotist