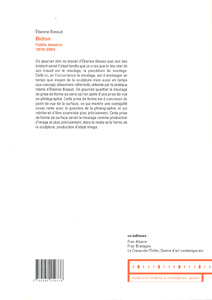 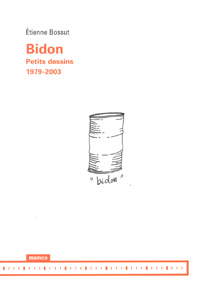 order
wishlist
Drawings by French sculptor.
One might suppose that Etienne Bossut's work is about objects, but Vincent Pecoil believes it is about moulds, the process of making moulds which relates to sculpting and a concept reformulated, remade by the very hand of the artist.
You might see the making of a mould as equivalent to the taking of a photograph ; it is a formulation in terms of surface. Consider the fact that “Bidon”, has a double meaning in French : (noun) an oil drum, and (adjective) bogus or put-on.
This publication presents an assemblage of "little drawings" from 1979-2003 of moulded objects fantisized, conceived or crafted by Etienne Bossut.
Since the end of the 1970's, Étienne Bossut (born 1946) has placed a means of production based on making casts at the heart of his work. This is a process of movement which transmits a global reflection about art and sculpture in particular. Étienne Bossut makes casts with coloured resins, using objects taken from both daily life and art: cars, records, skis, garden chairs, monochrome paintings, staging everyday life, as well as the flaws of our represen- tations, as a means of intensifying reality.
order wishlist
Text by Vincent Pecoil.
Translation Simon Pleasance.
published in 2004
bilingual edition (English / French)
17 x 24 cm
184 pages (51 colour & 16 b/w illustrations)
25.00 10.00 €
(special offer)
ISBN : 978-2-940159-33-8
EAN : 9782940159338
in stock