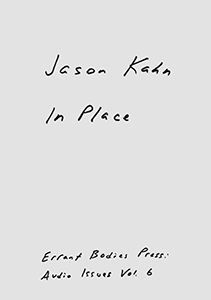 order
wishlist
In the series of works In Places Jason Kahn explores a variety of places and investigate them through their sounds. Influenced by Henri Lefebvre's theories, Kahn the musician experiences the daily rythms of life and how space is formed and reflected.
Based upon paying close attention to his surroundings, In Place documents the artist's sonorous engagement with specific locations. Spending hours at a given place within various cities, Kahn would do nothing else but listen, watch, and observe the daily life. Through such an elongated duration, sometimes up to 12 hours, a deeper and richer sense of place emerges. In Place is an elegant and thoughtful reflection on these experiences, capturing those small details that ultimately compose the world around us. Turning his ear to the daily life around him, Kahn's diaristic accounts capture an extremely tenacious form of attention—a bare listening.
Jason Kahn (born 1960 in New York, lives and works in Zürich) is a musician and artist who grew up in Los Angeles, and relocated to Europe in 1990. His work includes , performance and experimental composition. Kahn has been exhibiting his sound and visual works since the late 1990s, and has had solo and group exhibitions internationally, including Townhouse Gallery of Contemporary Art, Cairo, Diapason Gallery, New York, and Centre d'Art Neuchatel, Switzerland. Originally a percussionist, Kahn later began integrating live electronics into his playing. As a composer, his work draws on electronic and acoustic sound sources to create slowly developing compositions imbued with a sense of timelessness. His work addresses the entity of sound as both a physical and psychological factor shaping our consciousness. Kahn's sound installations seek to enhance spatial awareness through sonic intervention, focusing on expanding our perception to other dimensions of seeing, hearing and feeling a space. Kahn has given concerts at various festivals, art spaces and clubs throughout the world, traveling and presenting extensively in Europe, North and South America, as well as Asia.
order wishlist
published in September 2015
English edition
13 x 18,5 cm (softcover)
112 pages
13.00 €
ISBN : 978-0-9889375-4-3
EAN : 9780988937543
in stock
press releases
Le son du grisli, Guillaume Belhomme, 2016 (PDF) 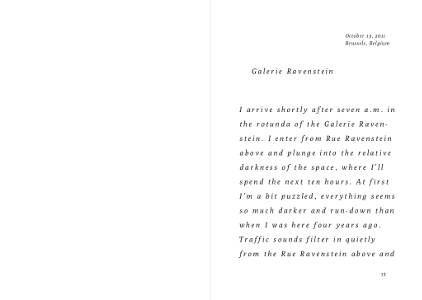 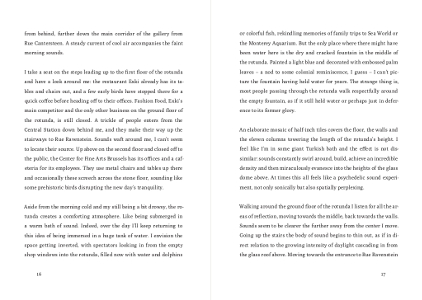