Multiple Meaning – Techno, An Artistic and Political Laboratory of the Present 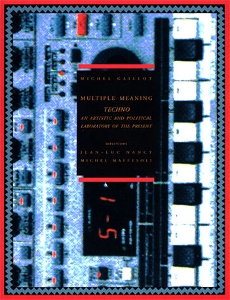 order
wishlist
Techno music seen as an experimentation to overcome the sociocultural boundaries instituted in the social space.
Techno is one of the more spectacular and mediatized aspects of contemporary culture. But is it more than mere entertainment, more than just an escape from a world that no ideology can claim to finalize? Like any fashion phenomenon, techno is the product of the human need for experimentation and the necessity to go beyond the limits and forms imposed on human existence. In terms of how it has appropriated technology for festive and aesthetic purposes, the techno movement could be considered as a sort of artistic and political laboratory of the present.
Michel Gaillot (1964-2020 was a philosopher, art critic and philosophy professor at ESACM (Ecole supérieure d'art de Clermont Métropole). He has also written numerous articles and given conferences in France and abroad on different issues relating to contemporary art and current political though, in particular with regards to “l'être-en-commun” or “being-together” and community.
order wishlist
Text by Michel Gaillot; interviews with Michel Maffesoli and Jean-Luc Nancy.
published in June 1998
English edition
16,5 x 21,5 cm (softcover)
128 pages
25.00 €
ISBN : 978-2-906571-76-1
EAN : 9782906571761
in stock