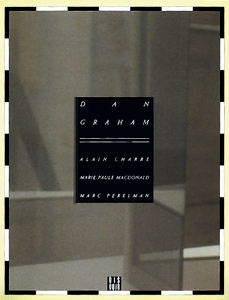 order
wishlist
A focus on the architectural works of the American artist.
Though architecture is clearly not the sole focus of Dan Graham's work, it is one of his themes of predilection, as much in his photography as in his installations and writings. How does Dan Graham use architectural ideas and functions, and conversely, how can architectural thinking respond to his accusations and justifications? This volume attempts to understand and evaluate his work from the perspective of modern and contemporary architecture, the necessary meeting-point for the basic questions he develops: urbanism, public/private space, sociopolitical life, ideological critique.
Dan Graham (1942-2022) was a highly influential figure in the field of contemporary art, both as an artist and as a well-respected critic and theorist. He was the founding director of the John Daniels Gallery (1964–1965), where he presented Sol LeWitt's first solo exhibition and showed works by Donald Judd, Dan Flavin, and Robert Smithson. Graham is known for his early conceptual work for magazines, his groundbreaking video work, and his site-specific architectural pavilions.
order wishlist
Texts by Alain Charre, Marie-Paule Macdonald, Marc Perelman.
published in April 1995
English edition
16,5 x 21,5 (softcover)
128 pages (16 color ill.)
21.00 €
ISBN : 978-2-906571-42-6
EAN : 9782906571426
in stock
Dan Graham: other titles