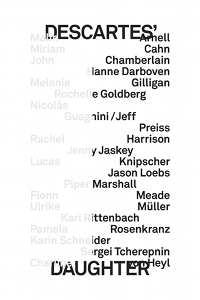 order
Taking the historical account of philosopher René Descartes' creation of an animatronic effigy of his deceased young daughter as its foundation, Descartes' Daughter explores the traditional divide between conceptual and expressive works, those dealing with either the mind or the body (catalogue).
The reader includes five essays that explore the room in between this divide of body and mind, both within the works exhibited in 2014 at the Swiss Institute and beyond. Fionn Meade, curator at the Walker Art Center, submits a poetic elegy to René Descartes, placing his ideas and the discussion around them at the center of this book. Jenny Jaskey, director and curator of the Artists's Institute, writes on scale and the subjective, metabolic qualities of “human”. Piper Marshall asks how one can curate a feminist art exhibition, firmly merging the discussion.
Published following the eponymous exhibition at Swiss Institute, New York, from September 20 to November 3, 2014.