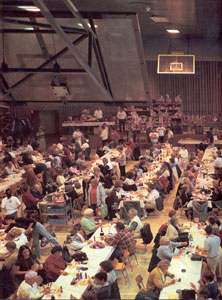 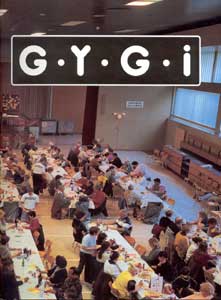 wishlist
Catalogue.
The (untitled) presentation at the Magasin in Grenoble of eighteen important works by Fabrice Gygi represents the first large scale survey of his work. It seemed logical to complete it with a catalogue whose documentary and analytical scope would compensate the absence of monographic publication (since the 1996 catalogue published for the Cairo Biennal).
The author of numerous performances, printed projects self-organised events during the 1980s and until the mid-1990s, Fabrice Gygi has constantly seeked conditions for producing and presenting his work beyond what galeries and institutions could offer. For the past five years, however, his work has found a place on the international art scene, enabling us today to consider both what it has in common with other contemporary practices engaging the social and the political, and the singularity of his individual experience.
The exhibition takes place in La Rue, an open and undivided space uniquely attuned to Fabrice Gygi's concerns, since, as its name indicates, it is readily identifiable to a public and urban space. Placed at the jointure between public and private, the exhibition proposes two separate zones, the first of which is akin to a “forum” or an unlikely playground, while the second is reminiscent of an “autonomous commune” or a fortified camp. Strucures for catering to the public, which ressemble the equipment used in open air parties, country fests and concerts, can thu be found alongside tents and elements evocative of control and constraint. Screens, stands, terraces, precarious dwellings, nomadic structures and temporary architecture are combined in an ambiguous and disturbing image – the representation of a society which, for each moment of leisure, play and “freedom”, creates new systems of regulation.
Yves Aupetitallot & Lionel Bovier (foreword)
Catalog published at the occasion of Fabrice Gygi's exhibitions at the Magasin of Grenoble between 27/05 and 10/09/2000.
Author of numerous performances, printed projects, and self-organized events in the 1980s up to the mid-1990s, Gygi has always claimed a social and political dimension to his work. The architectural structures or the public systems that he reproduces (screens, terraces, tents, stands, etc.) reveal the authoritative aspects and the control systems of our society.
wishlist
Co-edited with Le Magasin (www.magasin-cnac.org), the Fond Régional d'Art Contemporain de Bourgogne, Bob van Orsouw Gallery, Zürich, Chantal Crousel Gallery, Paris, and the Ecole des Beaux-Arts of Dijon.
published in 2001
bilingual edition (English / French)
23,5 x 29 cm
80 pages
ISBN : 978-2-940271-07-8
EAN : 9782940271078
sold out
Fabrice Gygi: other titles