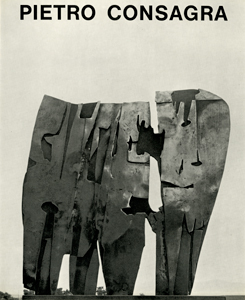 order
wishlist
Reference monograph, with an introduction by Giulio Carlo Argan.
Pietro Consagra (1920-2005) explored all aspects of artistic creation. He created sculptures, made paintings, drew, experimented with new media, and wrote poetry and prose with tireless energy and a polemical attitude. He also created tiny jewelry and erected buildings and monumental urban installations.
Ever since 1948 he established his conception of frontal sculpture, in which location has the value of a plastic element, and abstraction takes on a strongly psychological connotation.
Consagra obtained international recognition with his exhibitions at the Peggy Guggenheim Collection in Venice in 1949, the São Paulo Biennial in 1955 and 1959, Documenta in Kassel in 1959 and 1964, the Venice Biennale in 1956 and in 1960, the year in which he received the prize for sculpture.
order wishlist
Text by Giulio Carlo Argan.
published in 1962
bilingual edition (English / German)
24 x 30 cm (hardcover, cloth binding, dust jacket)
108 pages (5 color & 85 b/w ill.)
68.00 €
ISBN : 978-2-88006-911-7
EAN : 9782880069117
in stock
Pietro Consagra: other titles