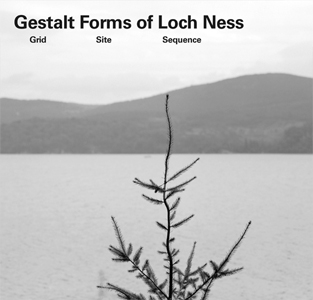 order
wishlist
Researching the myth.
In this book, Gerard Byrne brings together the culmination of ten years of research into the Loch Ness Monster, the myth fuelled in the 1930s by the popular press in order to sell newspapers. Appropriating formal conventions from the history of Land art that position landscape as the "other," Byrne has compiled a series of images that deploy Loch Ness as a signifier for the enigmatic, the unreadable. Using both the populist literature spawned by the Loch Ness myth and the photographic material his own expeditions have yielded as "found material," Byrne has developed a project both humorous and melancholic, that ultimately reflects a crisis of belief in the photographic image that has surfaced since the last heyday of Loch Ness interest in the 1970s.
Gerard Byrne (born 1969 in Dublin) is a visual artist working with photographic, video, and live art. In 2007 he represented Ireland at the Venice Biennale and the Biennale de Lyon and in 2008 at the Sydney Biennial, the Gwangju Biennial, and the Turin Triennial. Recent exhibitions include solo shows at MK Gallery, Milton Keynes; Lismore Castle, Co Waterford; Glasgow International Festival of Art; Lisson Gallery, London; and Green On Red Gallery, Dublin. Group exhibitions include "Little Theatre of Gestures", Malmo Konsthall, Sweden; "Slow Movement" at the Kunsthalle Bern, Switzerland; and "Sense and Sentiment" at the Augarten Contemporary, Vienna, Austria.
order wishlist
Edited by Anthony Spira, Andrea Vilani.
Texts by Brian Dillon, Anthony Spira, Andrea Viliani.
published in July 2012
English edition
30 x 29 cm (hardcover)
60 pages (70 b/w ill.)
27.00 €
ISBN : 978-3-03764-271-9
EAN : 9783037642719
in stock