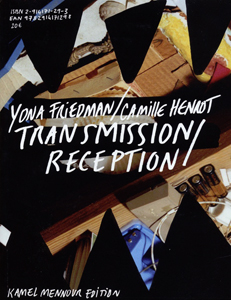 order
wishlist
A full documentation (with numerous photographs, some drawings, and the correspondence) on the collaborative project between Yona Friedman and Camille Henrot (a deconstruction of the space of the architect's appartemment, conceived as an abstract and symbolic space, by French artist).
Published on the occasion of the exhibition Le nouveau monde at Collections de Saint-Cyprien and musée des Beaux-arts de Bordeaux in 2007.
Yona Friedman (1923-2020) has since the middle of the 20th century been developing the concept of “mobile architecture” according to which housing and town planning should be conceived by their users and should integrate the unpredictability of future behaviour of the user.
Best-known for her videos and animated films combining drawn art, music and occasionally scratched or reworked cinematic images, the work of Camille Henrot (born 1978, lives and works in Paris) blurs the traditionally hierarchical categories of art history. Her recent work, adapted into the diverse media of sculpture, drawing, photography and, as always, film, considers the fascination with the "other" and "elsewhere" in terms of both geography and sexuality. This fascination is reflected in popular modern myths that have inspired her. The artist's impure, hybrid objects cast doubt upon the linear and partitioned transcription of Western history and highlight its borrowings and grey areas.
Camille Henrot's work has been exhibited in France at the Centre Pompidou, the Paris Museum of Modern Art, the Palais de Tokyo, the Espace Paul Ricard, the Jeu de Paume, the Cartier Foundation, the Louis Vuitton Cultural Space, the Foundation Maeght, the collections of Saint-Cyprien, the Museum of Fine Arts of Bordeaux, Crac Alsace, and abroad at Sungkok Art Museum in Seoul, the Palais des Beaux-Arts in Brussels, the Center for Contemporary Images in Geneva, the Hara Museum in Tokyo and Oi Futuro Cultural Center in Rio de Janeiro.
Camille Henrot won the Silver Lion at the 55th Venice Biennale in 2013, the Nam June Paik Award 2014, the Edvard Munch Art Award 2015...
order wishlist
Text by Olivier le Bihan.
published in May 2007
bilingual edition (English / French)
15 x 20 cm (softcover)
144 pages (color ill.)
20.00 €
ISBN : 978-2-914171-29-8
EAN : 9782914171298
in stock