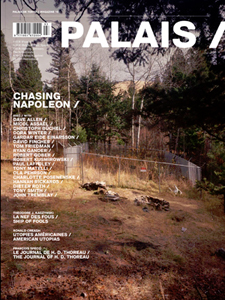 wishlist
Chasing Napoleon / Theodore J. Kaczynski / Ola Pehrson / Ronald Creagh / François Specq / Dieter Roth / Paul Lafolley / exhibition guide and a selection of books, music, movies, games and events around Chasing Napoleon...
1977. Theodore Kaczynski—who doesn't yet answer to the name Unabomber—lives alone in a small cabin in Montana in anticipation of the “collapse of the technological system.” Paul Laffoley finishes The Renovatio Mundi in the confines of a fifteen square meter atelier, and Dieter Roth works on a long-term project: a photographic inventory of all the streets and houses in Reykjavík (33,000 slides). That same year, the Community Reinvestment Act is passed, an attempt to regulate subprime loans.
A wavering of interpretations, an inversion of values, and a paradox of situations… Chasing Napoleon recognizes how a rise and fall can spread to reality itself. On the heels of Gakona and Spy Numbers, the electromagnetic specter and the infra-mince, Chasing Napoleon and this issue ofPalais / bring together eighteen artists whose works also read as instruction manuals on how to withdraw into seclusion and take refuge in the limits of the visible.
An issue around the Chasing Napoleon group show with: a satyrical fable written in prison by Theodore J. Kaczynski, an essay by the sociologist and historian of the anarchist movement, Ronald Creagh, on American utopias and the new libertarian intellectuals, an interview with François Specq, a specialist on Henry David Thoreau about the Journal of the American poet and philosopher, a text by American artist Paul Lafolley, portfolios (Ola Pehrson, Dieter Roth & Paul Lafolley), as well as an exhibition guide.
Published twice a year, Palais magazine offers an in-depth perspective on the exhibitions and program of the Palais de Tokyo. Palais allows people to see contemporary art in a topical way, as often as possible from the point of view of the artists themselves. Each issue of the magazine includes dossiers, interviews, essays, special projects and inserts, all contributed by artists, art critics, historians or theorists, making Palais magazine an essential tool for apprehending contemporary art.
wishlist
published in 2009
bilingual edition (English / French)
21 x 28 cm (softcover)
96 pages (color & b/w ill.)
5.00 €
ISBN : 978-2-84711-035-7
EAN : 9782847110357
currently out of stock
table of contents