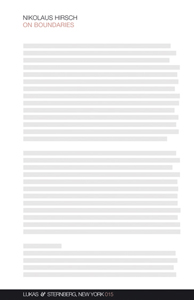 order
In several theoretical essays, dialogues on collaborative projects and reflections on his own work, the architect Nikolaus Hirsch explores the critical transformations of contemporary space and its effects on spatial practice. On the threshold to disciplines such as visual and performative arts (“Planning the Unpredictable” with William Forsythe) he questions the notion of “boundary”: as a phenomenon of social and political discourse, as a conflict between collaboration and authorship, as well as a physical limitation that negotiates between stable and unstable conditions.
Nikolaus Hirsch is an architect based in Frankfurt am Main, who teaches at the Architectural Association in London and at UPenn in Philadelphia. His work includes the internationally acclaimed Dresden Synagogue, the Hinzert Document Center, the European Kunsthalle in Cologne and United Nations Plaza (with Anton Vidokle) in Berlin. He has curated ErsatzStadt: Repräsentationen des Urbanen at the Berlin Volksbühne. His work has been awarded a number of prizes, including the World Architecture Award 2002, and has been shown in exhibitions such as New German Architecture in Berlin, Utopia Station at the Venice Biennial and Can Buildings Curate, AA London/Storefront Gallery in New York.
order
published in 2007
English edition
11 x 17 cm (softcover)
255 pages (24 colour ill.)
15.00 €
ISBN : 978-1-933128-10-8
EAN : 9781933128108
in stock