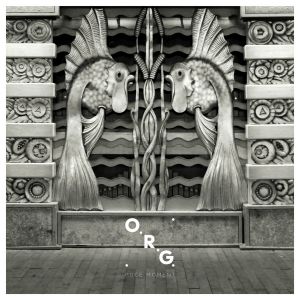 order
wishlist
An album of the electronic music duo whose pieces are composed to be played on the big mechanical organs of the Café des Orgues in Herzeele (Flanders).
The Café des Orgues is a mythical place. It's a small bistrot that pays no mine, in a town of just over a thousand inhabitants on the road to Dunkirk. We can't imagine that the back room hides the most singular dance floor in the corner if not much further. Three great mechanical organs of the famous Belgian brand Mortier are recessed on three of the four walls surrounding the floor. Every Sunday, the room is open to the public made of faithful zealous who never miss a weekend except for a hip operation, young people driven by curiosity as much as the simple desire to eat a carbonade-fries while drinking a Flemish beer, but also large families and lovers of all kinds of folk music.
What a sumptuous idea then to have thought and proposed the creation of an unpublished work played on these organs to make the crowd dance that day. The challenge was rto create a composition that is danceable, where the rhythms lead to the loss of landmarks and where is heard to the micro-details of the sounds of this gigantic sound machine, with grains and textures always more organic.
A series of rough, repetitive and heady pieces that take on a particularly strong dimension to be played on these limonary organs. As if a Comeladian orchestra was playing some Steve Reich in a deterritorialized fest-noz in the Flanders for clubbers fans of German Kraut-electronic music.
Gradueted of fine Arts school and The Fresnoy, national studio of contemporary arts for one and  a university and musical course for the other, Nicolas Devos and Penelope Michel founded the experimental electro-rock band Cercueil in 2005, project with which they toured in France and abroad. At the same time they created Puce Moment, a project envisaged as a laboratory open to experimentation, multi-disciplinary meeting and decompartmentalization. They have been working together for more than fifteen years around protean projects whose main theme is the relation of sound to image and the conditions of emergence of the narration and its perception. Their musical practice is mutant, it can be written or improvised, vocal, instrumental, electronic or electroacoustic, depending on the framework of the projects, from scenic creations, live soundtracks, sound and visual creations, performances, or through their collaborations. By appealing to the collective memory, they convoke through their past and contemporary mythical and mythological figures. Their plastic and sensory approach to sound leads them to design immersive devices.