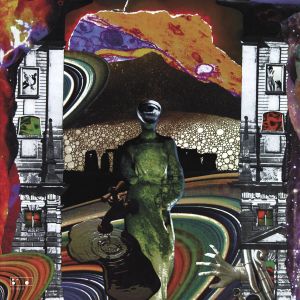 order
wishlist
Two new musical encounters.
For the first time together, author, vocalist and keyboard player Edward Ka-Spel (Legendary Pink Dots, Tear Garden) and sound collage wizard Steven Stapleton (Nurse With Wound) offer us a 19 plus minute long piece called The Man Who Floated Away, composed and recorded in 2017. On the other side, the master of drone Colin Potter (Nurse With Wound, Monos) and french free sax player Quentin Rollet (guest with The Red Krayola, Nurse With Wound, Mendelson, David Grubbs, DRAME …) present a long suite called The Closer You Are To The Center, The Further You Are From The Edge their first collaboration ever, recorded in London in 2012, with special guest Isabelle Magnon on piano.
Edward Ka-Spel is the lead singer, songwriter and co-founder (with Phil "The Silverman" Knight) of The Legendary Pink Dots, also known for his work on The Tear Garden with Skinny Puppy's cEvin Key.
Steven Stapleton (born 1957 in London) is the only permanent member of Nurse With Wound, a pioneer group of English experimental music since the early 80's. With more than 150 releases, alone or with other musicians, he has swept widely different musical styles, from industrial music to mambo, through electronics, improvisation, electroacoustics, with a lot of humor. He has also made appearances on other artists' records and worked as producer (Stereolab). He runs United Dairies, a record label which put out mostly NWW's records and some records of Current 93, The Lemon Kittens, Volcano The Bear.
Steven Stapleton is also a graphic artist. He signs his works by the name of Babs Santini. He has made many covers for Nurse with Wound, as well as other bands like Current 93, Coil, The Legendary Pink Dots. He has been living in Ireland for many years, where he builds houses, trailers with found material.

See also Nurse With Wound.
Colin Potter started making unusual music in the early 1980s. He was part of the 'DIY or tape underground' which flourished at the time as an alternative to mainstream music. In 1981 he set up the ICR label and IC Studio which are both still thriving after over thirty-five years. He developed a reputation for innovative mixing, sound processing and production and has worked with artists such as Current 93, Fovea Hex, Ora, Organum, Andrew Chalk, Jonathan Coleclough, Sol Invictus, Monos and many more, most notably with Steven Stapleton on numerous albums by Nurse With Wound.
In 1999 he started to perform live and since then he has been playing solo shows all over Europe and the US. He was also instrumental in persuading Nurse With Wound to return to playing live shows in 2005 and since then he has played with them at many venues and festivals all over the world. His performances feature live remixing of a multitrack recording along with sampling, electronic and acoustic devices with intense sound processing and propagation. A recent series of reissues of his early work (on Deep Distance and Sacred Summits) has led to an upsurge of interest in his music by a largely new audience.
Quentin Rollet (born 1974) started playing the alto saxophone at the age of 11 and the sopranino saxophone at 37. After a few years spent unlearning the teaching of the conservatory, he devoted himself solely to free improvisation. This led him to play on record or on stage with groups as varied as Nurse With Wound, Prohibition, The Red Krayola, Mendelson, David Grubbs, Herman Dune, Akosh S. Unit, Thierry Müller, Rubin Steiner, eRikm, Jac Berrocal, Andrew Liles... He is the co-founder of the labels Rectangle (with Noël Akchoté), reQords and Bisou Records.
order wishlist
published in March 2018
19.00 €
EAN : 3770001097039
in stock