Momus (born Nick Currie in 1960 in Paisley, Scotland) is a Scottish artist, critic, and musician. He released numerous albums on various labels, including 4AD, Creation and Cherry Red. He writes regularly about art, design and culture for The New York Times, ID, Frieze, Spike, and 032c. As a performance artist he's known as an Unreliable Tour Guide, telling tall tales in public spaces. 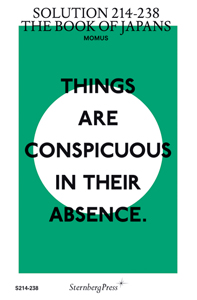 Solution 214-238 – The Book of Japans
2011
English edition
Sternberg Press - Solution
(last copies available!)
The rehabilitation of the idea of the “far.” 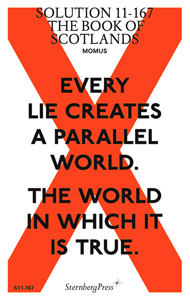 Solution 11-167 – The Book of Scotlands
2009
English edition
Sternberg Press - Solution
sold out
At a time when functional independence seems to be a real possibility for Scotland—and yet no one is quite sure what that means—a delirium of visions, realistic and absurd, is necessary.