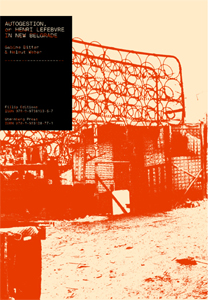 Autogestion, or Henri Lefebvre in New Belgrade
2009
bilingual edition (English / French)
Sternberg Press - Monographs and artists' books
The artist book by Sabine Bitter and Helmut Weber is based on an unpublished text by French philosopher and urbanist Henri Lefebvre which is printed as a facsimile and accompanied by essays from Ljiljana Blagojevic, Zoran Eric, Klaus Ronnberger, and Neil Smith.