Allen S. Weiss is a theorist, editor, translator, curator, playwright who has authored and edited over 35 books in the fields of performance theory, landscape architecture, gastronomy, and literary studies, including Phantasmic Radio (1995) and Breathless: Sound Recording, Disembodiment, and the Transformation of Lyrical Nostalgia (2002). He directed Theater of the Ears (a play for electronic marionette and taped voice based on the writings of Valère Novarina), and Danse Macabre (a marionette theatre with the dolls of Michel Nedjar). He teaches in the Departments of Performance Studies and Cinema Studies at the Tisch School of the Arts of New York University. 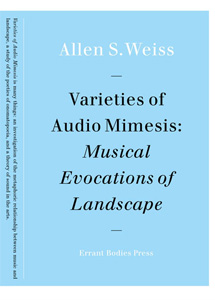