Matias Faldbakken (*1973) is an artist and writer living in Oslo. Son of the celebrated Norwegian author Knut Faldbakken, he has published two novels, The Cocka Hola Company and Macht und Rebel under the alias Abo Rasul. Drenched with acid humor and continuously hitting below the waist, his books immediately caused a considerable stir in Norway. If, in these publications, he underlines the differences and similarities between the so-called underground and the mainstream, and between the "independent" and the "commercial" in everyday life, these subjects are also central to his art practice. Fascinated with systems of knowledge, power, order, and exchange, he shows an interest in understanding how art and artists can be active participants in these systems.

Faldbakken studied at the National Academy of Fine Arts in Bergen as well as at the Städelschule in Frankfurt am Main. He represented Norway in the Nordic Pavillion at the Venice Biennial in 2005, as well as showing his work in the Wrong Gallery at the Whitney Biennial, the Stedelijk Museum Amsterdam, the National Museum Oslo, the Sydney Biennial and the KW Institute for Contemporary Art Berlin, among others. 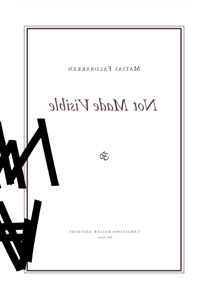