Bernard Stiegler (1952–2020) was a philosopher and media theorist. After graduating with a Ph.D. at EHESS, he was programme director at the Collège International de Philosophie and chair of IRCAM in Paris. Since 2006 he was director of the Department of Cultural Development at the Centre Georges-Pompidou. Earlier on in his life he had been prosecuted for his involvement in an armed robbery and it was during his prison sentence (1978-1983) that he became fascinated with philosophy, according to his autobiographical account Passer à l'acte (2003). 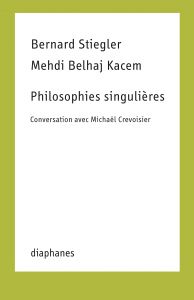