Born 1969 in Shimane (Japan), Izumi Kato graduated from the Department of Oil Painting at Musashino University in 1992. Since the 2000s, he has garnered attention as an innovative artist through exhibitions held in Japan and across the world. In 2007, he was invited to take part in the 52nd Venice Biennale International Exhibition, curated by Robert Storr.
Children with disturbing faces, embryos with fully developed limbs, ancestor spirits locked up in bodies with imprecise forms—the creatures summoned by Izumi Kato are as fascinating as they are enigmatic. Their anonymous silhouettes and strange faces, largely absent of features, emphasize simple forms and strong colors; their elementary representation, an oval head with two big, fathomless eyes, depicts no more than a crudely figured nose and mouth. Bringing to mind primitive arts, their expressions evoke totems and the animist belief that a spiritual force runs through living and mineral worlds alike. Embodying a primal, universal form of humanity founded less on reason than on intuition, these magical beings invite viewers to recognize themselves. 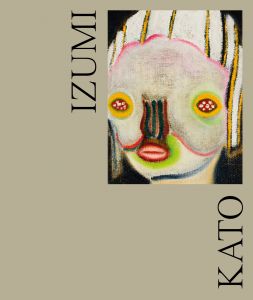 untitled
2020
bilingual edition (English / Chinese)
Perrotin
currently out of stock
This luxurious monograph presents a wide selection of works by Izumi Kato, Japanese painter and sculptor known for his mysterious representations of human figures with primitive aesthetics, alongside exhibition views. It is accompanied by four original critical texts and a poem by the artist.