Sammy Baloji (born 1978 in Lubumbashi, Democratic Republic of Congo)'s photographs and videos have their roots deep in the ongoing upheavals in Democratic Republic of Congo: the often invisible consequences of the mining of rare minerals used for electronic components; China's gigantic investments all over the African continent; and his country's industrial and cultural heritage. His photographs have taken out many prizes including the Prince Claus Award, the Spiegel Prize and the Rolex Award and have been shown at the Rencontres d'Arles, the MMK Museum für Moderne Kunst (Frankfurt), the Gulbenkian Foundation (Lisbon/Paris) and the Smithsonian National Museum of African Art (Washington). 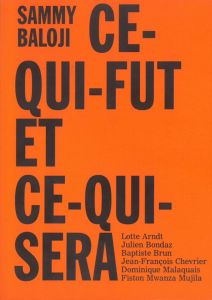 Ce qui fut et ce qui sera
2020
French edition
Art centers, museums, galleries & varia
This collective book devoted to the work of Sammy Baloji explores how the artist, born in the DRC in 1978, attempts to “restore defeated connections”. How to think about the memory sifted through colonial violence? What effects does the mining of yesterday and today in Katanga and elsewhere have on the project of a common future? How does form make history beyond erasure?