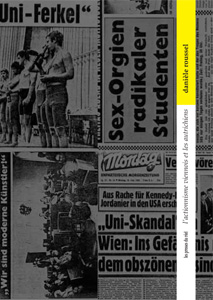 L'Actionnisme viennois et les autrichiens
2008
French edition
Les presses du réel – Avant-gardes – Bibliothèque art action pensée
Viennese Actionism was one of the strongest effort of the 1960's to develop contemporary art and a forerunner of what is now widely known as Performance Art. Danièle Roussel interviewed not only the former actionists (Otto Muehl, Hermann Nitsch, Günther Brus, Rudolf Schwarzkogler) but also some journalists, politicians, historians and witnesses of that time.