Walter De Maria was an American artist born in 1935 in California. He was passionate about music from a very young age and became a professional drummer. He studied in Berkeley and participated in many Happenings in California. De Maria moved to New York in 1960, and made his first series of sculptures the following year. In 1963, he opened the artist-run gallery, 9 Great Jones Street Gallery, where he exhibited his sculptures. Though he was hesitant about pursuing a musical career, he continued to compose, and played with Velvet Underground, before definitively opting for sculpture. He began working with metal in 1965, with the support of collector Robert C. Scull.
From 1968 onwards, Walter De Maria became one of the leading figures of Land art, making large-scale works like Mile Long Drawing in the Mojave Desert. He began to exhibit his works abroad in major exhibitions, notably at the Kunstmuseum in Basel in 1972. In 1969, he began working on his most famous work, The Lighting Field, completed in 1977. Located in a desert region of New Mexico, The Lighting Field is an installation of 400 steel poles regularly distributed over an area of approximately one square kilometer. When thunderstorms erupt, they hit metal poles, as some photographs show. In the 1970s, Walter De Maria created permanent works in New York, including The New York Earth Room (1977) and The Broken Kilometer (1979). He died in New York in 2013. 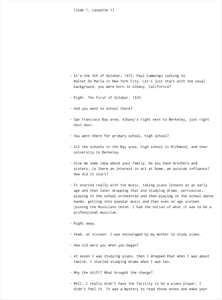