Ramuntcho Matta (born 1960 in Neuilly-sur-Seine, lives and works in Paris and Epaux-Bezu, France) started his career as a musician in the late seventies. Beyond being a composer, he also uses visual arts in order to give shape to his questioning, to more singular and complex subjects of creation, sometimes using sound, drawing, video, space, and words or combining them. Chris Marker once defined his work as “multimedium”.
He likes best to work with others, as with many artists such as Don Cherry, Brion Gysin, John Cage or Chris Marker. He has recorded about twenty solo albums, and as many collective ones. He has played music and has had exhibitions in Paris, New York, London, Madrid, Barcelona, Tokyo, Rome… He has taken part in many collective exhibitions as well: Louis Vuitton space in Paris, Milan Art Library, Valenciennes Fine Arts Museum, San Diego Fine arts Museum, Palais de Tokyo in Paris, La Piscine in Roubaix, Galerie Anne Barrault in Paris. He has been working for SometimeStudio since 2000, a label that produces either forgotten artists or new ones. In 2008, he created LIZIERES—a think tank about culture and resources in the South of Aisne department in France—whose aim is to break the isolation of avant-garde thinkers and creators, and make experimentation possible. 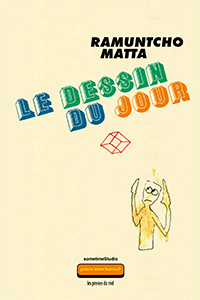