Giovanna Zapperi lives in Paris and is professor of art history at the Université de Tours. Her research focuses on the connections between art criticism, visual culture and feminism. Her texts have been published in numerous exhibition catalogues and magazines, including Afterall, e-flux, Texte zur Kunst, Feminist Review and Oxford Journal. She is the editor of Carla Lonzi: Autoportrait (JRP|Ringier, 2012). 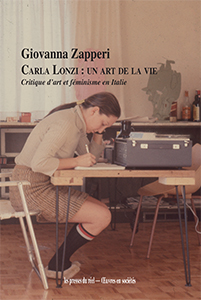