Michael Günzburger (born 1974 in Bern, lives and works in Zurich) works in drawing, printed graphics and installation. His works have been shown at the Kunsthaus Zurich, Kunstmuseum Bern, and galleries in New York, Mexico City and Paris, among other places. 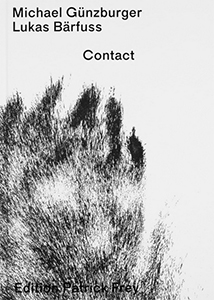 Michael Günzburger, Lukas Bärfuss
Contact
2018
English edition (texts in English, German, Latin)
Edition Patrick Frey
This publication features a series of lithographs which captured impressions of wild animals. This technique was developed by artist Michael Günzburger to explore with directness and immediacy the physical energy of bestiality. The series is accompanied by a text by writer Lukas Bärfuss which takes the reader on an expedition up through northern woods all the way to the frozen wilderness of an island in the North Sea.