Annika Bender was one of the pseudonyms of artists Dominic Osterried and Steffen Zillig, under which they wrote the art critic blog Donnerstag, from 2010-2014. 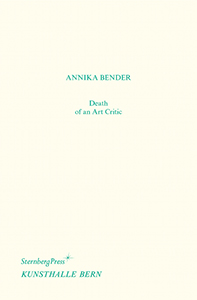 Death of an Art Critic / Tod einer Kritikerin
2017
bilingual edition (English / German)
Sternberg Press - History, Criticism and Theory
This publication is an adaptation of a public statement by art critic Annika Bender, the editor-in-chief of the Donnerstag-Blog, on why her blog was discontinued. Bender was in fact a fictitious character created by artists Dominic Osterried and Steffen Zillig. The two artists discuss why they deemed a certain form of masked critique important and necessary in our times.