Photographer David Willen (born 1968 in Bern) and picture editor Tania Willen (born 1967 in Bern) have been working together since 2003 and teaching at the Zurich University of the Arts since 2013.

Jörg Scheller (born 1979 in Stuttgart) is an art historian and heads the theory section of the bachelor degree course Art & Media at the ZHdK. He freelances on the side as an author and curator, as well as singer and bassist in the heavy metal duo Malmzeit. 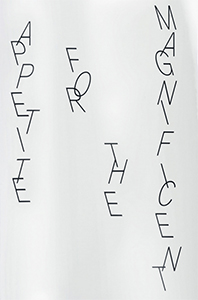 Appetite for the Magnificent
2017
English edition
Edition Patrick Frey
Appetite for the Magnificent is a photographic and essayistic exploration of the history and present-day world of the aquarium. The contribution by David and Tania Willen tackles the aesthetic dimension of Swiss present-day aquariums, while Jörg Scheller's essay on naturalist Philip Henry Gosse retraces the evolution of the aquarium at the interface between art, science and religion...