Etienne Chambaud (born 1980 in Mulhouse, France, lives and works in Paris) carries out a persistent exploration on the nature of a work of art: its relation to other works, its contexts, and the way artworks are used, charged with meaning or endowed with a particular narrative.
Chambaud's work never functions in isolation but finds its sense or its interest in a permanent dialogue with other works. They grow mutually rich, while gradually drawing the vague contours of a constellation made of common references. They work as palimpsests, which guard the trace of a former work while proposing a new composition, thus oscillating endlessly between inescapable repetition and continuous new horizons.
The works of Étienne Chambaud don't deliver themselves solely through the interpretation of their form, but require recourse to an additional element, such as their titles or captions, to be circumscribed. He creates a discomforting situation by confronting the spectator with an enigmatic and seemingly mute object. However, the hermetic nature of the work does not lean on elitism, but rather creates a certain equality between its spectators.
Raphael Brunel, Les Cahiers de la Création Contemporaine 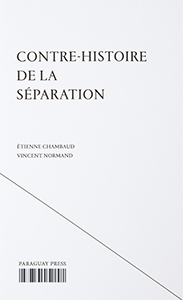 Etienne Chambaud, Vincent Normand
Counter History of Separation
2017
bilingual edition (English / French)
Paraguay Press
Publication based on the eponymous film by Etienne Chambaud and Vincent Normand in which the authors develop the concept of the “Decapitated Museum.” The voice-over in the film has been made into a one-edition book, which was rephotographed according to the technique the authors used to make the film. The outcome is a photography book that is as much a text document than an imaginary scene.