Richard Wentworth (born 1947 in Samoa, lives and works in London) has played a leading role in New British Sculpture since the end of the 1970s. His work, encircling the notion of objects and their use as part of our day-to-day experiences, has altered the traditional definition of sculpture as well as photography. By transforming and manipulating industrial and/or found objects into works of art, Wentworth subverts their original function and extends our understanding of them by breaking the conventional system of classification. The sculptural arrangements play with the notion of ready-made and juxtaposition of objects that bear no relation to each other. Whereas in photography, as in the ongoing series Making Do and Getting By, Wentworth documents the everyday, paying attention to objects, occasional and involuntary geometries as well as uncanny situations that often go unnoticed.
Major solo presentations include Bold Tendencies, Peckham (2015), Black Maria with Gruppe, Kings Cross (2013); Whitechapel Gallery (2010); 52nd Venice Biennale (2009); Tate Liverpool (2005); Artangel (2002); Bonner Kunstverein (1998); Stedelijk Museum (1994); Serpentine Gallery (1993). 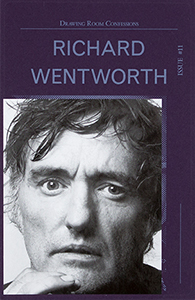