Alexandre da Cunha (born 1969 in Rio de Janeiro, lives and works in London) is not the typical maker, despite the fact he operates within a sculptural field of overtly modernist tendencies. The artist intervenes into the everyday, displacing specific objects and entering them into an exhibitory realm, reorienting them as artworks. The nature of this appropriative act creates a space in which objects oscillate between strange tensions, bringing the paradoxes of contemporary art into plain sight. In da Cunha's exploratory practice, a traditional method of figurative sculpture making is confused with found objects. His inventions emerge from a cross reading of Brazil's neo-concrete movement and the contradictions of modernist architectural cities like Rio de Janeiro. The precariousness of urban design, which is rooted in the necessity of re-purposing found materials, is met by the minimal aesthetics of ubiquitous mass-produced objects. 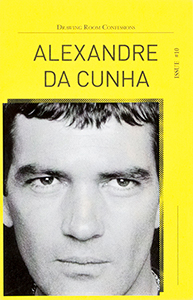